<NPC> A small island sat in the middle of the great ocean. Stormy winds constantly sprung up around it, and it even hailed on occasion. On this island, there were few things. This island, dubbed "Dragon's Maw" had many large, sharp, and pointy rocks jutting from it, which were incredibly dangerous to those that couldn't pay attention. Dragon's Maw was roughly the size of a corporate parking lot. Very small. Covered in sand (besides the rocks) it truly was a dead zone. A great place for a dragon to live. Sitting on one of the rocks on an oddly sunny afternoon, Zegulas looked over the other rocks and observed the sea. It was brutally violent today, in harsh contrast to the calm, sunny disposition of the island.

"What to do today.. I need someone to train or something..." He hummed to himself, watching as a group of seagulls attacked a poor hermit crab on the beach. Raising a hand, the rock that he was sitting on decreased in height by about an inch. Suddenly, a rock-like dagger shot from the tips of his fingers and struck the seagulls, killing them nearly instantly. "Well.. that was boring.." </NPC>

The Legion scowled as it waded out of the wader, it had taken a while for it to heal from the battle with the gaggle of reapers. As it stepped onto dry land its scowl deepened as sea water sloshed around in its boots, and weighed down its clothes; with barely a conscious thought it allowed the water to pass through it. With a splash the ocean water fell onto the sands before the Legion continued further in land. Glancing at an anthropomorphic reptilian demon that stood to the side before looking forwards again and continuing onwards, crushing dead seagulls and a hermit crab underfoot. 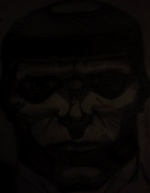 <NPC>"Well.. that was just unnecessary..." Zegulas whined, slithering off the rock and onto the beach before the Legion. "Now.. apologize at once." he ordered, before realizing.. this was a Demon. He wouldn't apologize unless forced. Spreading his feet across the ground evenly, the sand started sliding up into his very pores. Heating it up with his own body temperature, Diamonds formed around his skin. Grabbing onto the Legion, he jammed his hand deep into the creatures stomach. "Now then.. apologize before I send thirteen pounds of razor sharp diamond through your body.. through every single cell. Damage like that you won't heal very quickly. It may take months... maybe even years..." He explained, before a bit of diamond stretched from his hand, as if accentuating his point. </NPC>

The Legion glared into the face of the demon that had its hand in its gut, before pulling a rather unusual move and pivoting out to the side. This action caused half of the Legion's abdomen to be torn out, as well as granting it the chance to draw one of its rifles from its back. Coming out of it's pivot it stood glaring at the side of the reptilian demon, with it's rifle aimed at it's torso. "506,049 of us wish to introduce our selves and ask your name, 493,950 of us wish to attack you with out any conversation, one wishes to apologize. We are Legion of Mann, for we are many. Identify yourself." As it finished speaking it fired a shot at the other, its wounds already beginning to disappear. Not healing like most beings would, instead merely disappearing as if being replaced by tissue from another being.

<NPC> Zegulas watched as the bullet bounced off his skin. Or perhaps it bounced off before it touched his skin. "You should know, you foolish incompetent, that I am a demon overlord.. I am the strongest we can get. Compared to me.. you are nothing. You could hit me with everything you got, and I wouldn't flinch." He responded offhandedly, as if it were nothing to brag about. "Besides.. I'm the one asking questions around here... Now then.." Instantly, sand began to seep up once again. Forgetting his diamond tactics, the sand merely vaccuumed inside of the demon. Once he was full, it continued to suck in. Then it ejected from every one of his pores. The sand was intergrated into his very dna. He had become a living sandcastle.

"Bullets are useless against me." He informed The Legion, before picking him up with one massive, sandy hand and slamming him into the earth. Forming a sphere of sand around him, he held him into the air. "Don't even try to phase through this.. not only will it not work, seeing as the sand is me, and not a mortal item anymore, I will pierce you with so much sand, Life himself will take pity on you and cut your chord.." Zegulas explained, before grinning. "By the way.. the name is Zegulas." Zegulas the demon Trainer, as his full title reveals. There was no need for that no, however. </NPC>

The Legion frowned as the sand surrounded it. 'Unfortunate, we do have things to do still...' its face still drawn tensely, the Legion stood in the orb of sand and turned towards were it believed Zegulas to be, having heard his voice from that direction. " Since you are being so...diplomatic, we apologize for the destruction of the crab and rats with wings. Though we are inquisitive, what would a rank have to do with power? If you take slight from this question, do forgive us, we have little to no understanding of the ranks of any supernatural being; despite being one ourselves." As it spoke the Legion returned its rifle to its back.

<NPC>Zegulas moaned. "Another Idiot demon whom doesn't understand society.." Releasing the sand hold, he expelled the rest of the sand from his system and sighed. "Let's put it this way.. have you ever read Bleach? Well... Your rank is about... Don Kanonji, while mine is at Aizen or higher." He explained, quite lulzy. First he made an equals three joke, and now he makes a bleach joke. What will Zegulas think of next?

The Legion stared confused at Zegulas mention of bleach, "What does a corrosive chemical most commonly used for cleaning white clothing have to do with those names..." It muttered quietly while scratching its chin. However at the mention of training it perked up slightly, before staring inquisitively at the other demon. "However tantalizing the offer of the gaining of a tactical advantage is, we feel inclined to inquire as to the purpose of your offering training. Nothing is free in this world...."

<NPC> Zegulas laughed. "I like you, kid.. You got moxxy... The only drawback to this training is for you to leave me alone. I will allow you to survive in this world without getting killed, and you leave me alone. Sound fair to you?" He asked, taking the hand he was going to use to shake Legion's, and scratched his chin. "Though if you feel so compelled to repay me, you could help me start a war or something.. I grow bored of this monotony." Zegulas didn't know it, but he may have just struck the greatest deal of his life. </NPC>

The Legion chuckled deeply as a grin split its face from ear to ear, literally. "[b][i]We believe that is a very fine method of repayment. Perhaps the war that we start for you will even spread to be joined with the one we have already created upon the Gilbaris Islands.[b][i]" Extending its hand the Legion erupted into full blown laughter as for once in its existance, all the voices of Legion had spoken in unison.

<NPC> "Then shall we get started?" Zegulas asked him, before sinking into he ground. This wasn't a normal intangibility, or regular jet stream through dirt. Oh no, Zegulas actually moved the sand away from his very being. By shooting oxygen out of his cells at an incredibly fast rate, the walls around him were actually pushed away. Like a magnet. Then he began to phase through the ground. What can I do to fuck him up.... Zegulas thought, before accidentally crashing into the ocean. Due to his intangibility, he was fine, but it still surprised him.

Grabbing onto the whale, he felt the cold, slick skin with his fingertips. The only tangible part(s) of him. Twirling with lightning speed, he grabbed onto an octopus that was trying to hide in the rocks. Pulling the two together (a little heave for the whale) he created life. Well, not really created... more like borrowed.

The two sea creatures became one, new being. By possessing the whale, then going through the octopus, he possessed the octopus at the same time. Using intergration on both of them, he left the new being, and watched the fun. A 50 foot, purplish beast with massive tentacles coming from it's back stared at him. A sharp beak covered it's mouth, and an ink pouch sat beneath it's stomach. Everything was now proportionate to whale size.

Sliding back onto the beach, he grinned. "Hey Legion... look what I made." He called out, as the whale-pus emerged from the water, tentacles writing. It circles around in the water, staring at Legion through beady eyes. "Eat him." He ordered it, and watched as the tentacles from it's back shot from the surface towards the Legion. It's beak clacked open and shut several times. It was hungry. </NPC>

An evil grin split the Legion's face in half before its entire form rippled. With a ripping sound it spread apart and assumed it's demon form, before leaping into the water and phasing through it until it stood on top of Zegulas' creation. With a strong backhand it knocked back the reaching tentacles, before crouching and pressing the barrels of its shoulder cannons to the whale-pus' back. With a roar it fired the guns.