Here there be dragons <Event>

Koori watched as Koori was fighting with a white dragon.The dragon used some kind of cold breath and it almost hit him.He jumped back sighing,and sat back down on the edge of the building. Rain started to fall from above as lightning smashed from the sky and destroyed the building infront of him.Koori pulled out a nice shinny green granny smoth apple and started eating it.

Suddenly another crack smashed throught sky with a flash of light.He knew another dragon was free. The glowing blueish green light flew towards him at super speed.It soon made it infront of his face." Hmm looks like I got one too." He reached out and touched a Blue and Green gem on on a small golden chain.

Nothing happened. He turned up his music and throw it behind. " What a worthless piece of junk......" he sighed and started to walk away in the rain.

WHY? Why does it always end like this? Kai got ready to dodge. His pendant started to melt into shadows, creeping up his hand like floating water, forming his weapon. I don't want to fight. In fact, I hate to fight. Lowering his stance, Myrrh was only moments away from chopping the Immortal up. But somehow, I always end up fighting. I don't want it like this, hell! I didn't defy death just to fight for all eternity. But if I ever want to change something... then I guess there is no sense in just whining to myself about it, right? The world won't change from words alone. I have to become a Reaper... or else, I will never change anything! Jumping high into the air, his spirit started to flow through his body, propelling him through the air, as he jumped again from collected Spirit under his feet, getting distance, as he slit open the palm of his left hand with the weapon in his right.
Blood flew out, ignoring all gravitational pulls, over his left hand. "Heaven Piercer!" One single spear was fired in Myrrhs direction, aiming for her right wing. He didn't want to hurt her, but simply giving up? Never! Spinning around in the air, his sickle was ready to counter any new charge - but he would not gut open the beautiful ice dragon with that weapon, it would surely be able to slice through dragon scales, no. Instead, the dull side of the blade would be aimed at the head of Myrrh, in order to knock her out - and to stop any possible icy breath attacks by punching the jaw shut. Of course, that left him open for her claws, but being cut open didn't sound as painful as being frozen alive.

//:: Uriel ::\\
Uriel swung his sword at the dragon as it passed him. He knew why the dragon would be pissed off at him especially because it was Uriels idea to use the dragons bones as the seal to seal up the demons in hell. Well since this dragon wanted to fight Uriel was going to enjoy it, but he was curious as to what the dragon called himself and what element he use. Uriel stood the behind the dragon as he had flown by him in his rage, and said to him

"Well I can understand why are you are pissed off at me, but let me ask you something what is the point of fighting me since Im the one who brought you out here from those earrings?'Also what is your name and what element do you control, as you are well...larger then the other dra"gons that I've seen appearing here.'"
_________________ 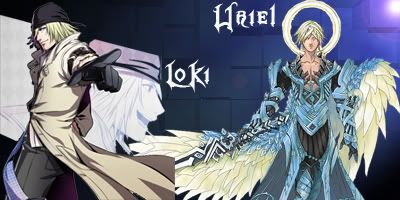